Forget Strictly - the latest dance craze is sweeping the nation. It's Theresa May, dancing like only she knows how! Spoiler: Lord of the Dance she is not.

By all means, Theresa should definitely be getting involved in local culture and respectfully participating, but here, no-one else is dancing apart from the scouts who are putting on the show. It's unnecessary, and dare I say it, massively cringe. Oh, and political suicide. Look, first there was the whole 'I won't call an election, JK yes I will', then there was the fields of wheat debacle. As if we weren't enough of an embarrassment to the world already thanks to the delightful Brexit (which is going really well guys, yay!), we now have Theresa here trying to salvage some sort of miraculous trade deal with Africa to save us and ALL WE ARE TALKING ABOUT IS HER AWFUL, TERRIBLE DANCING.

Face it - say if the company you worked for was going under and your job was at risk, and your boss said they were going to Vegas to 'make some deals' and vaguely 'fix...stuff' but then all you saw was footage of them at magic shows and gambling at pool parties with DJ Khaled, you'd question their dedication and focus really. Some things are more important than dancing when you know it's not playing to your strengths. I'd tell Theresa to stick to hers but it's still unclear exactly what her strengths are....but let's just say, it's certainly not dancing. (Or trade deals. Or Brexit. She has great taste in shoes though.)

So, the moral of the story is, 'don't dance if you can't and focus on saving the UK from a trade-less Brexit instead'. Or 'dance like nobody's watching'. Or 'live fast and die young'. I forget.

PM shows off dance moves again Theresa May danced with a group of scouts during a visit to the UN offices in Nairobi, Kenya. 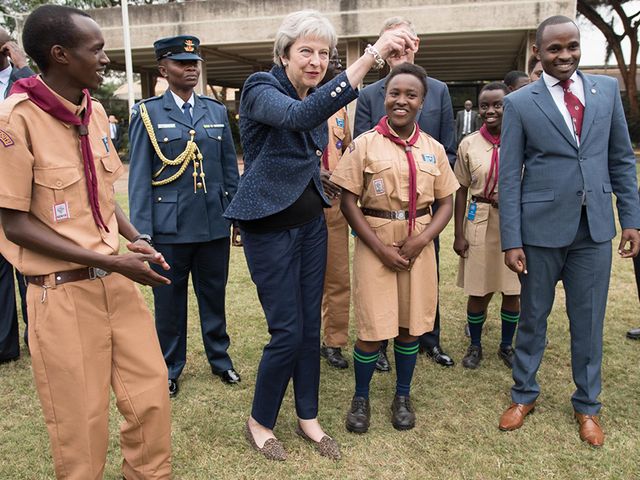 Reverse-Mentoring Your Boss (Not a Euphemism)
Aspire

A Work Bestie Is More Important Than KPIs
Aspire

Is Culture Fit a Con?
Aspire