The Olympics in Rio began just five days ago, and already we are witnessing the still blatant sexism in sport. Female athletes are more often than not subjected to comments on their looks, instead of on their sporting achievements.

Katinka Hosszú, the Hungarian swimmer, won the gold medal and broke the world record at this year's Olympics in the 400-metre individual medley. However, the NBC reporter covering the race simply turned the camera to her husband and said "and there's the man responsible." This is just one example of sporting achievements being devalued for women, which is the entire concept behind Dove's new #MyBeautyMySay campaign.

Dove is no stranger to attacking societies belief about what makes a beautiful woman. However, the #MyBeautyMySay campaign is aiming to drive real change in the way women are portrayed by the media. By launching this campaign at the start of the Olympics and by teaming up with former gymnast Shawn Johnson, it is brilliantly capitalising on the real-time sexist portrayal of women that will be angering women across the globe. By aiming to drive change, they are helping to promote Dove as a brand that actively wants to make a difference to the lives of women. The campaign offers consumers a meaningful incentive to get involved and enables Dove to have a real chance at forcing the media to change the way they report on female athletes.

This means that this campaign is likely to win over consumers that have perhaps felt alienated by other campaigns, as they want to help reach the tangible goal of changing attitudes and actions within the sports and media industries. A very innovative campaign by Dove.

In an open letter, gold medallist Shawn Johnson explains how she received comments on her appearance from the very start of her career, resulting in the trivialisation of her athletic ability and an impairment of her own self-confidence. "I was being told by the media, and the world, that I was “too muscular,” that I had “too much bulk,” that I was “too short,” that I “looked too young.” People even said that I had “big ears!”" 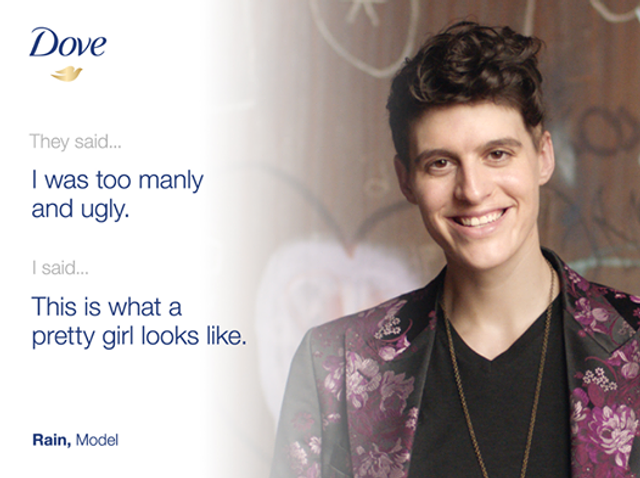 Gender equality is a top priority at the #Olympics: more than half the our athletes attending #Rio2016 are female pic.twitter.com/jTvpOzBTP9

The media’s Olympics coverage reminds us just how taxing it is to be a female athlete: https://t.co/Ct7jumKtaa pic.twitter.com/cr1tljXpNT

Millennials re-branded as Recessionals as it's time to put things back to normal.
Paul Farrer

Hope for the class of 2020
Abigail Moss
repost  cancel